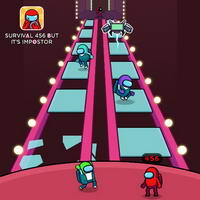 Survival 456 But It Impostor

Who might have guessed a year ago that some South Korean TV show could blast like an atomic bomb on the firmament of streaming TV entertainment, drawing the attention of over a billion viewers all over the world? Alas, that has happened. And now, beginning from the end of 2021, continuing through 2022, the world insanely wants to play various free games that are themed with Squid Game.

Our website broadly allows this opportunity, carefully collecting on the web pages all existing up to this moment games themed as Squid Game. It is exactly because of the popularity of the TV show, these games are designed and made by various digital gaming companies, popping up like mushrooms after the rain here and there. Today, there are several dozen of them already exist (they were all crafted within a few months after the start of the eponymous show), which signifies the show’s popularity.

Just like the rest of the online games hosted by our entertaining website, Squid Game pieces are all available to be played for free. You don’t have to pay for anything. We are aware that there are also some mobile Squid Game pieces, which are downloadable for Android or Apple phones today, where users can make in-game purchases – if they really want to buy some specific item, finding it attractive. But we’re assuring you that our online games are always free of charge and available 24/7 for men and women, boys and girls of the entire planet, without the need for downloading.

On our servers, you won’t find any outdated gaming pieces that would require Flash technology to play – everything’s made on HTML5, which is supported by all modern devices and is safe to use in 2022.

Enjoy playing free Squid Games with us and tell your peers about those games!